What is Shotokan Karate-Do 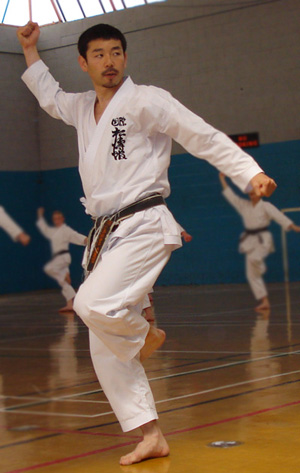 Kara is the Japanese for empty, while te means hand, which translates as the way or path. So Karate-do is The Way of the Empty Hand. It is a martial art in which the ultimate purpose is not to seek to win but to work towards perfection of character, self-control and self-discipline by accumulating experience through training.

It is also a form of self-defence using all body parts, which, by challenging and systematic training, become effective and powerful weapons. Karate encompasses whole body movements which develop balance, flexibility, coordination, speed and power. This is achieved through the constant practice of the basic movements (Kihon), which can be considered a complete art form due to their variety and complexity.

Oriental fighting arts can be traced back over 2,000 years. The Japanese island of Okinawa came into contact with many of these combat systems, especially those of China. Some of their features were added to native Okinawan fighting art. In the 1600s, the Japanese invaded Okinawa and banned the carrying of weapons, so the warrior-class secretly trained themselves in unarmed self-defence, using and improving the ancient techniques. Thus modern Karate is the outcome of centuries of interchange between China, Okinawa and Japan. It only came to be taught openly to the public in the early 1900s.

The founder of modern Karate, Gichin Funakoshi from Okinawa, first demonstrated his powers to the Japanese public in 1922 in Tokyo. Funakoshi established his first Dojo in Japan in 1936. The Japan Karate Association (JKA) was created in 1955 with Funakoshi as the Chief Instructor. The name Shotokan is derived from Funakoshi's pen-name, Shoto and the Japanese word for a hall, kan.

The Japanese first brought Karate to Europe in the late 1950s. Hirokazu Kanazawa Soke, 10th Dan, is generally recognised as the most extraordinary Shotokan Karate instructor alive today. Shotokan Karate is the original and most popular style of Karate and differs from other styles by combining swift and dynamic techniques with controlled (non-contact) and powerful strikes.

In Okinawa, a miraculous and mysterious martial art has come down to us from the past. It is said that one who masters its techniques can defend himself readily without resorting to weapons and can perform remarkable feats: the breaking of several thick boards with his fist or ceiling panels of a room with a kick. With his shuto ("sword hand"), he can kill a bull with a single stroke; he can pierce the flank of a horse with his open hand; he can cross a room grasping the beams of the ceiling with his fingers, crush a green bamboo stalk with his bare hand, shear a hemp rope with a twist, or gouge soft rock with his hands.

Some consider these aspects of this miraculous and mysterious martial art to be the essence of Karate-do. But such feats are a small part of karate, playing a role analogous to the straw-cutting test of kendo [Japanese fencing], and it is erroneous to think that there is no more to Karate-do than this. True Karate-do places weight upon spiritual rather than physical matters, as we shall discuss. True Karate-do is this: that in daily life, one's mind and body be trained and developed in a spirit of humility; and that in critical times, one is devoted utterly to the cause of justice.

What is the meaning of Kara?

Karate-do is a martial art peculiar to Okinawa in its origins. Although it has in the past tended to be confused with Chinese boxing because of the use of the Chinese "kara" character in its earlier name, in fact, for the past thousand years, the study and practice of masters and experts, through which it was nurtured and perfected and formed into the unified martial art that it is today, took place in Okinawa. It is, therefore, not a distortion to represent it as an Okinawan martial art.

One may ask why the Chinese "kara" character has been retained for so long. As I discuss in the section "The Development of Karate-do," I believe that at the time the influence of Chinese culture was at its peak in Japan, many experts in martial arts travelled to China to practice Chinese boxing. With their new knowledge, they altered the existing martial art, called Okinawa-te, weeding out its bad points and adding good points to it, thus working it into an elegant art. It may be speculated that they considered "kara" (with the Chinese character) an appropriate new name.

Since, even in contemporary Japan, many people are impressed by anything foreign, it is not difficult to imagine the high regard for anything Chinese that prevailed during that period in Okinawa. Even at the time of the present writer's youth, the lack of a complete set of Chinese furniture and furnishings in one's home was a severe impediment to the social influence of any leading family. With this background, the reason for choosing the Chinese "kara" character, meaning "Chinese," as a simple case of exoticism is apparent.

Following tradition, the writer has in the past continued to use the Chinese character. However, because of the frequent confusion with Chinese boxing and the fact that the Okinawan martial art may now be considered a Japanese martial art, it is inappropriate and degrading to continue using the old "kara" in the name. For this reason, despite many protests, we have abandoned the use of it to replace it with the new character KARA.

The first connotation of kara indicates that karate is a technique that permits one to defend himself with his bare hands and fists without weapons.

Second, just as it is the clear mirror that reflects without distortion or the quiet valley that echoes a sound, so must one who would study Karate-do purge himself of selfish and evil thoughts, for only a clear mind and conscience can he understand that which he receives. This is another meaning of the element kara in Karate-do.

Next, he who would study Karate-do must always strive to be inwardly humble and outwardly gentle. However, once he has decided to stand up for the cause of justice, he must have the courage expressed in the saying, "Even if it must be ten million foes, I go!" Thus, he is like the green bamboo stalk: hollow (kara) inside, straight, and with knots, that is, unselfish, gentle, and moderate. This meaning is also contained in the element kara of Karate-do.

Finally, in a fundamental way, the form of the universe is emptiness (kara), and, thus, emptiness is form itself. There are many kinds of martial arts, judo, kendo, So-Jitsu ("spear techniques"), Bo-Jitsu ("stick techniques"), and others, but at a fundamental level, all these arts rest on the same basis as Karate-do. It is no exaggeration to say that the original sense of Karate-do is the basis of all martial arts. The form is emptiness; emptiness is the form itself. The kara of Karate-do has this meaning.

Funakoshi sensei was doing quite a lot to promote his art in his homeland of Okinawa. Word eventually made its way to Japan, which, as we all know, had a vibrant martial history. So, in 1917, Gichin Funakoshi was invited to Japan to demonstrate his karate at the Butokuden in Kyoto.

Funakoshi continued to travel to Japan, giving exhibitions, but Shotokan's "big" break came in 1922. The Japanese Ministry of Education asked Funakoshi to participate in a demonstration of ancient Japanese martial arts at the Women's Higher Normal School in Tokyo. After the demonstration, Gichin was approached by Jigaro Kano, the founder of judo. He asked Funakoshi to stay longer in Japan and show him (Kano) some basic techniques.

Months later, when he next tried to leave, Funakoshi was approached by the painter Hoan Kosugi. He also wanted karate instruction for himself and his artist's group members. So, Funakoshi again postponed returning home and began the first organised karate teaching in Japan at the Tabata Poplar Club. While teaching at Tabata, Funakoshi decided to remain in Japan. He would spend the rest of his life teaching karate to the Japanese people.

While in Japan, Funakoshi wrote the first book ever on karate. Entitled "Ryukyu Kempo: Karate", Hoan Kosugi, who is also credited with designing the Shotokan tiger, designed the book. Four years later, the book was re-released with the new title "Renten Goshin Karate-Jitsu". His next book, "Karate-do Kyohan" was written in 1935.

Funakoshi continued to teach and give exhibitions. In 1928, he was asked to give a demonstration for the royal family of Japan. For Funakoshi, this would have been enough but of honour, but it was made all the more remarkable because the demonstration was done on the palace grounds!

Karate's popularity continued to grow. Karate clubs continued to spring up at colleges, universities and businesses throughout Japan. All this time, Funakoshi kept a dojo at the Meisei Juku. However, time and a 1923 earthquake eventually created the need for a new place to train. Funakoshi was offered to use space at the kendo hall of Hiromichi Nakayama. Eventually, Funakoshi was given another great honour. Nationwide, karate practitioners chipped in to pay for the construction of a dojo dedicated to instructing Funakoshi's karate. In 1936, the Shoto-kan was born!