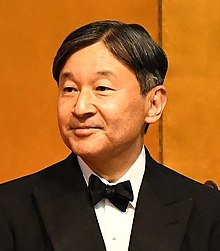 The Emperor of Japan is the head of the Imperial Family and is the ceremonial head of state of Japan's system of constitutional monarchy. According to the 1947 constitution, he is "the symbol of the State and of the unity of the people."

Historically, he is also the highest authority of the Shinto religion as he and his family are said to be the direct descendants of the sun-goddess Amaterasu, and his importance also lies in dealing with heavenly affairs, including Shinto ritual and rites throughout the nation.

In Japanese, the Emperor is called Tennō (天皇), which means "heavenly sovereign". In English, the use of the term Mikado (帝) for the Emperor was once common, but is now considered obsolete.

In Kojiki or Nihon Shoki, a book of Japanese history finished in the eighth century, it is said that Japan was founded in 660 BC by Emperor Jimmu. The current Emperor is Akihito, who has been on the Chrysanthemum Throne since he was enthroned after his father, the Emperor Shōwa (Hirohito), died in 1989.

The role of the Emperor of Japan has historically alternated between a largely ceremonial symbolic role and that of an actual imperial ruler. Since the establishment of the first shogunate in 1192, the Emperors of Japan have rarely taken on a role as supreme battlefield commander, unlike many Western monarchs. Japanese Emperors have nearly always been controlled by external political forces, to varying degrees.

In fact, from 1192 to 1867, the shoguns, or their shikken regents in Kamakura (1203–1333), were the de facto rulers of Japan, although they were nominally appointed by the Emperor. After the Meiji restoration in 1867, the Emperor was the embodiment of all sovereign power in the realm, as enshrined in the Meiji Constitution of 1889. His current status as a figurehead dates from the 1947 Constitution.

Since the mid-nineteenth century, the Imperial Palace has been called Kyūjō (宮城), then Kōkyo (皇居), and is located on the former site of Edo Castle in the heart of Tokyo. Earlier, Emperors resided in Kyoto for nearly eleven centuries.

The Emperor is not even the nominal Chief Executive unlike most other constitutional monarchies and he possesses only certain important ceremonial powers. The Constitution states that the Emperor "shall perform only such acts in matters of state as are provided for in the Constitution and he shall not have powers related to government" (article 4).

It also stipulates that "the advice and approval of the Cabinet shall be required for all acts of the Emperor in matters of state" (article 3). Article 4 also states that these duties can be delegated by the Emperor as provided for by law. Article 65 explicitly vests executive power in the Cabinet, of which the Prime Minister is the leader. The Emperor is also not the (ceremonial) commander-in-chief of the Japan Self-Defense Forces. The Japan Self-Defense Forces Act of 1954 also explicitly vests this role with the Prime Minister.

While the Emperor formally appoints the Prime Minister to office, article 6 of the constitution requires him to appoint the candidate "as designated by the Diet", without any right to decline appointment.

Article 6 of the Constitution delegates the Emperor the following ceremonial roles:

The Emperor's other duties is laid down in article 7 of the Constitution, where it is stated that the "Emperor with the advice and approval of the Cabinet, shall perform the following acts in matters of state on behalf of the people":

Regular ceremonies of the Emperor with a constitutional basis are the Imperial Investitures in the Imperial palace and the Speech from the Throne ceremony in the House of Councillors in the National Diet Building. The latter ceremony opens ordinary and extra sessions of the Diet. Ordinary sessions are opened this way each January and also after new elections to the House of Representatives. Extra sessions usually convene in the autumn and are opened then.