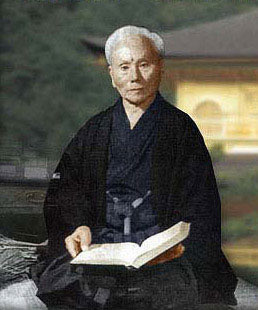 Gichin Funakoshi was born in Shuri, Okinawa, in 1868. As a boy, he was trained by two famous masters. Each trained him in a different Okinawan martial art. From Yasutsune Azato, he learned Shuri-te. From Yasutsune Itosu, he learned Naha-te. It would be the melding of these two styles that would one day become Shotokan karate.

Funakoshi-sensei is the man who introduced karate to Japan. In 1917 he was asked to perform his martial art at a physical education exhibition sponsored by the Ministry of Education. He was asked back again in 1922 for another exhibition. He was asked back a third time, but this was an exceptional performance. He demonstrated his art for the Emporer and the royal family! After this, Funakoshi-sensei decided to remain in Japan and teach and promote his art.

Gichin Funakoshi passed away in 1957 at the age of 88. Aside from creating Shotokan karate and introducing it to Japan and the world, he also wrote the book on karate, "Ryukyu Kempo: Karate-do". He also wrote "Karate-Do Kyohan" - The Master Text, the "handbook" of Shotokan, and he wrote his autobiography, "Karate-Do: My Way of Life". These books and his art are a fitting legacy for this unassuming and gentle man.

If there was one person who could be credited with placing karate in the position it enjoys on the Japanese mainland today, it would be Gichin Funakoshi. This Meijin (master) was born in Shuri, Okinawa, and didn't even begin his second life as a harbinger of official recognition for karate on the mainland until he was fifty-three years old.

Funakoshi's story is very similar to that of many greats in karate. He began as a weakling, sickly and in poor health, whose parents brought him to Itosu for his karate training. Between his doctor, Tokashiki, who prescribed certain herbs for strengthening him, and Itosu's good instruction, Funakoshi soon blossomed. He became a good student, and with Asato, Arakaki and Matsumura as his other teachers, expertise and his highly disciplined mind.

When he finally came to Japan from Okinawa in 1922, he stayed among his people at the prefectural students' dormitory at Suidobata, Tokyo. He lived in a small room alongside the entrance and would clean the dormitory during the day when the students were in their classes. At night, he would teach them karate.

After a short time, he had earned sufficient means to open his first school in Meishojuku. Following this, his Shotokan in Mejiro was opened, and he finally had a place from which he sent forth a variety of outstanding students, such as Takagi and Nakayama of Nippon Karate Kyokai, Yoshida of Takudai, Obata of Keio, Noguchi of Waseda, and Otsuka, the founder of Wado-Ryu karate. It is said that in his travels in and around Japan, while giving demonstrations and lectures, Funakoshi always had Otsuka accompany him.

The martial arts world in Japan, especially in the early Twenties and up to the early Fourties, enjoyed ultra-nationalists riding high, and they looked down their noses at any art that was not purely called a pagan and savage art.

Funakoshi overcame this prejudice and finally gained formal recognition of karate as one of the Japanese martial arts by 1941.

Many karate clubs flourished in mainland Japan. In 1926, karate was instituted at Tokyo University. Three years later, karate was formally organised on a club level by three students: Matsuda Katsuichi, Himotsu Kazumi, and Nakachi K.Funakoshi was their teacher. He also organised karate clubs at Keio University and the Shichi-Tokudo, barracks situated on the corner of the palace grounds.

Funakoshi visited the Shichi-Tokudo every other day to teach and was always accompanied by Otsuka, reputed to be one of the most brilliant of his students in Japan proper. Otsuka's favourite kata was the Naihanchi, which he performed before the royalty of Japan, with another outstanding student named Oshima, who performed the Pinan kata (Heian).

One day, when Otsuka was teaching at the Shichi-Tokudo, a student, Kogura, from Keio University, had a san-dan degree (3rd-degree black belt) in kendo (Japanese fencing) and also a black belt in karate, took a sword and faced Otsuka. All the other students watched to see what would happen. They felt that no one could face the shinken (open blade) held by a kendo expert.

Otsuka calmly watched Kogura, and the moment he made a move with his sword, Otsuka swept him off his feet. As this was unrehearsed, it attested to the skill of Otsuka. It also bore out Funakoshi's philosophy that kata practice was more than sufficient in times of need.

In 1927, three men, Miki, Bo and Hirayama, decided that kata practice was not enough and tried introducing Jiyu kumite (free-fighting). They devised protective clothing and used kendo masks in their matches to utilise full-contact. Funakoshi heard about these bouts, and when he could not discourage such attempts at what he considered belittling the art of karate, he stopped coming to the Shichi-Tokudo. Both Funakoshi and his top student, Otsuka, never showed their faces there again.

When Funakoshi came to mainland Japan, he brought 16 kata with him: 5 Pinan, 3 Naihanchi, Kushanku Dai, Kushanku Sho, Seisan, Patsai, Wanshu, Chinto, Jitte and Jion. He kept his students on before they progressed to the more advanced forms. The repetitious training that he instituted paid dividends; his students went on to produce the most precise, exact type of karate taught anywhere.

Jigoro Kano, the founder of modern judo, invited Funakoshi and a friend, Makoto Gima, to perform at the Kodokan (then located at Tomisaka). Approximately a hundred people watched the performance. Gim, who had studied under Yabu Kentsu as a youth in Okinawa, performed the Naihanshi shodan, and Funakoshi performed the Koshokun (Kushanku Dai).

Kanso sensei watched the performance and asked Funakoshi about the techniques involved. He was incredibly impressed. He invited Funakoshi and Gima to a tendon (fish and rice) dinner, during which he sang and made jokes to put Funakoshi at ease.

Funakoshi was not without his detractors because of his sincerity in teaching the art of authentic karate. His critics scorned his insistence on the kata and decided what they called "soft" karate wasted too much time. Funakoshi insisted on Hito-kata Sanen (three years on one kata).

Funakoshi was a humble man. He preached and practised an essential humility. He did not preach that it is rooted in the proper perspective of things, full of life and awareness. He lived at peace with himself and with his fellow men.

Whenever the name of Gichin Funakoshi is mentioned, it brings to mind the parable of "A Man of Tao (Do) and a Little Man". As it is told, a student once asked, "What is the difference between a man of Tao and a little man?" The sensei replied, "It is simple. When the little man receives his first dan (degree or rank), he can hardly wait to run home and shout at the top of his voice to tell everyone that he made his first dan. Upon receiving his second dan, he will climb the rooftops and shout to the people. Upon receiving his third dan, he will jump in his automobile and parade through town with horns blowing, telling one and all about his third dan".

Funakoshi was a man of Tao. He did not emphasise competitions, record-breaking or championships. He emphasised individual self-perfection. He believes in common decency, and respect one human being owes to another. He was the master of masters.

Funakoshi sincerely believed it would take a lifetime to master a handful of kata and that sixteen would be enough. He chose the kata, which was best suited for physical stress and self-defence, stubbornly clinging to his belief that karate was an art rather than a sport. To him, kata was karate.