Important: Paying Fees online is for Bushido Karate Club members only. The only exception is if you have been invited to attend a trial class you can pay for the Trial Class using this system. All payments go through PayPal so its very secure. 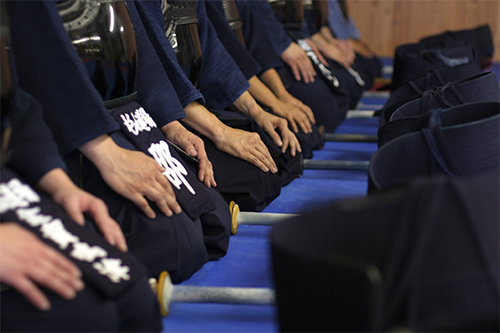 It is believed that Budo can cultivate both the mind and body. However, if the meaning of Budo is unclear, then it is impossible to know what to train and indeed what method to utilize. In identifying Budo, it is important to understand why Judo ("the way of Yawara/Jujutsu"), Kendo ("the way of the sword"), Kyudo ("the way of the bow"), Aikido ("the way of Aiki") and the like, are considered to be Budo ("martial ways"). To aid this clarification, the difference between "Michi (way)" and "Jutsu (technique)" should be known.

Good guidelines and tuition have become indispensable for this aim, but if each person does not grasp what Budo is individually during practical training, then focus, concentration and discipline in Budo is not achieved. In my view, I would like to offer the reader and dear friends, aspiring to or showing interest in Budo, some material as a guideline for their training.  First of all, I would like to establish my notion of Budo as a basis for discussion: "Budo is the lifestyle of finding one's Michi (way) in the midst of the struggle of human life and of putting this Michi into practice."

In the process of putting this into practice, it is paramount that methods (fighting techniques) and the process of training to achieve a goal (high intention) are mastered. These become indispensable. If we employ the language of Bujutsu ("martial techniques") and Bushido ("the way of the warrior"), it can also be phrased as follows: "Budo is the lifestyle of pursuing one's own Bushido whilst maintaining the feeling of tension emanating from determing life or death; and this has to be put it into practice through Bujutsu training." Therefore, training Budo involves practicing both

Since the pursuance of Bushido (spirit) and putting it into practice through Bujutsu (methods) are indispensable, one way of progression is by seeking a Michi ("way") and then entering into Jutsu ("techniques"). However, generally, people who enter a Budojo (place for Budo), initially start through training Bujutsu ("techniques") and later seek spirituality. In other words, they proceed from Jutsu to Michi, and from there, knowing the relationship between Jutsu and Michi, improve both together. In Budo, pursuing Michi is getting to know one's true character and feelings and search for one's spiritual values; seen through the perspective of traditional culture, which can be best seen in Bushido.

When putting this Michi into practice, one must be prepared to fight, even if dying in battle, depending upon the circumstances. This strength should be the spirit of Budo. A further question is evoked as to how one should cultivate a strong spirit which transcends life and death? Here, each Bujutsu training has its own characteristics. However, that does not mean that Bujutsu alone is able to cultivate strong spirit. It goes without saying that also sports and other things can train such a strong spirit-depending on the spiritual quest of the respective individual.

In ancient times, warriors trained Bujutsu (martial techniques) in order to put it into practice as a tool for real fighting. Nowadays, however, Bujutsu is employed for personal development. Although determining life and death by Bujutsu has disappeared, there is no change regarding the fact that these techniques were born in warring times, and still contain actual fighting power. I believe that if training is carried out with this feeling of tension, it is possible to obtain the skills and principles of fighting and thereby cultivate a strong spirit which transcends life and death.

I think that this is the greatest significance of practicing Bujutsu in today's society. Today, various kinds of "Budo" have unfortunately lost the quest for spirit (although the word Michi is used in their names). They should probably rather be called degenerated "Bujutsu which has been reduced to athletic sports". Of course, as the acts of violence, which can be seen routinely in society in general, have not changed considerably since ancient times, there is also the aspect that Bujutsu as such is useful as a technique of self-defense.

Furthermore, even today's highly developed battles, which don't take shape and are hardly visible, and since ultimately they are battles between the intentions of human beings with bodies and flesh, and since the basic concept of knowing the opponent and oneself, smashing the opponent's fighting power, and crushing his fighting spirit, does not change, the role of Bujutsu to obtain a concrete basic sense of an invisible, inaudible, so to speak shapeless fight, is nowadays particularly important. Moreover, even if a new method of attack has been developed and a new way of coping with it is being sought after, the underlying basics for this are the currently available Bujutsu tactics. Looking at the history of Bujutsu, it becomes clear that even the creativity of a Bujutsu genius who transcends his epoque originates from within the training of the Bujutsu that existed within that epoque.

The pursuit of Budo

Contemporary Budo calls for a Bujutsu that is useful today. In order to achieve this, it is necessary to derive from the training of existing Bujutsu the fighting techniques and principles which can be revived today, and to prepare for applying them in the future. For this purpose an understanding of the times and circumstances is also essential. The acquisition of knowledge of modern science and technology has become indispensable for the further development of Bujutsu. The selection of methods and means (techniques) changes in any event depending on in what one sets the purpose of one's life, in other words depending on the way of seeking spirit.

Not to mention that when it comes to putting spirit into practice, it is a comprehensive action, various selections are revised, and as a result a resolute Michi is worked out. Based on the above, the following three points can be given for pursuing Budo in these times:

I think that the pursuit of knowledge, cultivation of strong spirit, acquisition of methods and means, understanding of current affairs and participation in movements for the society were things that people involved with fighting had in common in some way in every era, and these things can be called the practice and implementation of Budo. Budo is not separated from reality, discussing only spirituality, its true aim lies in pursuing methods of putting it into practice while observing the situation, it is not merely a technique of athletic sports.

Consequently, my basic idea is that Budo training has to be continuously devised in both the spiritual and the technical dimension, with the tension of real fighting. However, the current state of Budo is that it has gone far away from the noble traditional culture of the Japanese people, that it has forgotten the Bushido spirit, which is the essence of the soul of Japan (Yamatodamashii), and that it is degenerating into a technique of athletic sports.

The restoration of true Budo

In the current curriculum of schools, there are courses in Budo sports including Judo, Kendo, Kyudo etc., but true Budo, the core of cultivation of Japanese spirit, is not taught. In the general public, Budo is understood as having the same meaning as the word Jutsu (technique), and it is described as a "contest Bujutsu" that lacks spirituality and has undergone sportification. Moreover, even though on a social and cultural level Budo spread to foreign countries and the Budo population is growing, as Budo is translated "martial arts" ("techniques for fighting"), it advances into the direction of going far away from the original Budo.

Speaking in terms of culture and tradition, these facts become directly apparent in training halls that are gymnasiums without Kamidana (in other words without pursuit of spirituality). Here, Budo should be restored as traditional culture in modern times, by reviving the appearance of Budo as it should originally be, by clarifying the difference and the relation between Michi and Jutsu, and by continuing training both of them. If this is not done, Budo as culture and tradition of Japan will turn into an obsolete word. So, how to revive the essence of true Budo? It is by following the original Budo. First of all sticking to the traditional forms, studying the heart of Japan, awaking one's own heart, forging the soul of the nation.

Training starts with paying respect to the spirits of the people and to the deities of Budo, and it includes etiquette and loyalty between teacher and student as well as between students, the pursuit of one's own Michi, and the practice of Bujutsu. And the place of training is a Budojo that enshrines the deities and is expected to maintain a clean and peaceful environment, but this is the minimum requirement. If the heart is lost and even the form is lost, the revival of tradtion becomes increasingly difficult. In order to restore the essence of true Budo, first of all the forms of Budo training that are still left should be kept, and further decay should be stopped. In addition, one should search for and learn from instructors who are living in these modern times and are putting Budo into practice.

Training and continuation in times and circumstances in which Bu(do) is denied, lost sight of, even generally taught to be not necessary, brings with it hardships and difficulties that differ from a quest in the midst of prosperity. If mind and body are trained, strong spirit is cultivated, techniques are refined under instructors who experienced such hardships in the situation that traditional Budo was denied under the occupation after the defeat in war. I believe that the power of the people to break the present decay and proactively create the next culture is being stocked.